So addicted to Dungeon Empires . . .

Dungeon Empires entirely sucked my soul into its void last week, and I'm still trying to find a way out. I really have Arkenor to thank for pointing me to the vast expanse of this free-to-play monster of a game, which I kind of thought would be a nice distraction from whatever it was I was distracting myself with. You know, I kind of have a shtick going with a few blogs like Wizard101, LOTRO, Rift, DDO, Mytheon, and oh . . . just everything you might find links to at happydueling.com. ;-) I may have to start a Dungeon Empires blog after last week LOL!

The concept appears simple at first, and then slowly by slowly you start to see that this is in fact a very complex game from Gamigo. I think I might actually be more in love with the concept of this game more than the game itself, which is like two games in one.

So in Dungeon Empires you take the role of a male hero . . . First complaint, where THE HECK are the female heroes? This has absolutely got to change. You can't just make male heroes the only option anymore. In fact, I have a few complaints about the "masculinity" of this site in general. Two words: Succubus bum. They even put a lipstick heart on the succubus bum to draw your eye right to it. LOL. Egads Gamigo, CHANGE. Your core audience could be much much larger because this is a great game hiding behind bad Marketing. Luckily with the magic of F11 and full screen mode you can hide said Succubus bum.

Anyway, your male hero can take on one of three emphases: Strength, Dexterity, or Intelligence. These stats form the foundation of your character's abilities: Basically Fighter, Rogue, and Wizard. Although, much like classic Diablo style, these classes seem to be able to learn each other's skills interchangeably (I do believe). They just each start with different starting skill. (Wizard life drain for me, yay!)

At first look Dungeon Empires looks entirely pedestrian. Leveling appears pretty standard. (Check.) Combat is turn-based. (Check.) Gothic-style succubus bum on the front page. (Check.) Yup, this is a strategy-based RPG, but what's absolutely un-pedestrian about the game is that you're simultaneously leveling up your own dungeon full of creatures. Basically, you're roughly given a 24x24 space to layout your dungeon, room by room. You pack your dungeon full of creatures and furniture that buffs your creatures. To do this you have to "level" the rooms in your dungeon to unlock their ultimate potential. 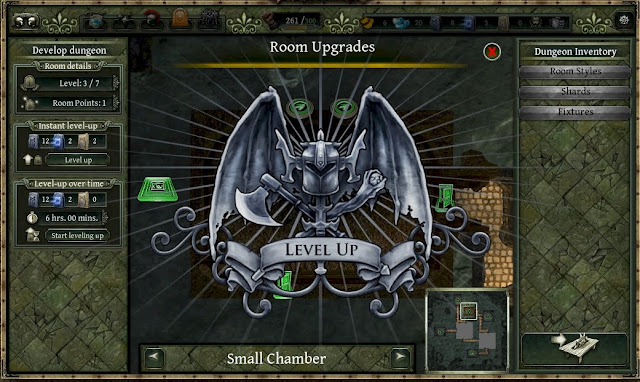 The kid inside of me who used to forge his own dungeons on graph paper giggles at this aspect of the game.

Rooms and creatures aren't freely given beyond the tutorial though. It takes quite a bit of adventuring in other people's dungeons to find the bits and pieces that can fill your dungeon. Fear not! If you get bored with the look at feel of player dungeons, you can always play through a few offerings that Gamigo offers to you as pre-built dungeons from them. 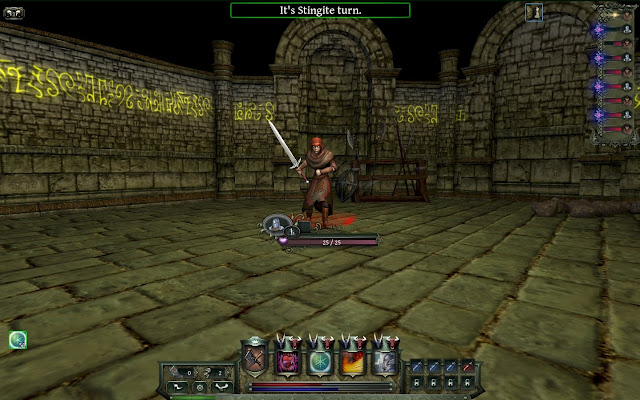 Just a little different look can do wonders to breaking up the monotony. Is there monotony? Yeah, there can be. Unfortunately this game can move a little slowly, and especially if you don't really know what you're doing, but read on . . . I've got a few helpful tips and a link to share to make it not so painful.

If I've piqued your interest in this game a touch and you're going to try it out, do yourself a favor and after playing through the tutorial, stop by the Dungeon Empires forums and read this guide from Silverdash. It's just chuck full of good information.

Here's my main tips that I've gained from the past week of play that might help things go a touch faster.

1- Click the mini-map in dungeons to move from area to area. This alone makes the game move much faster. If the door you're running to is far enough away, your character will hurry up and sprint to the next doorway.

2- Ice Shield. Get this spell as soon as possible. It's been by far the most helpful spell in the game aside from the health drain you get as an intelligence-based character. If you have the mana for it, cast this spell immediately after every battle to prepare you for the next room even if you still have remaining protection from your old ice shield.

3- Keys. It took me a bit to understand that if you don't get at least six keys, those keys disappear after the level and are cashed out for 20 gold. If you're ever faced with a chest that gives you the option of choosing either a key or an amount of gold less than 20 gold, take the key!

4- Leveling rooms. Leveling rooms is accomplished through a system of trading in runes. Leveling a room from first to second level only costs around 3 runes, but this quickly doubles and then some. Without purchasing dragon ore (cash shop money), you can earn runes by throwing random fixtures and rooms that you find from adventuring into "the shredder" down in the lower right hand corner of your dungeon creating interface. 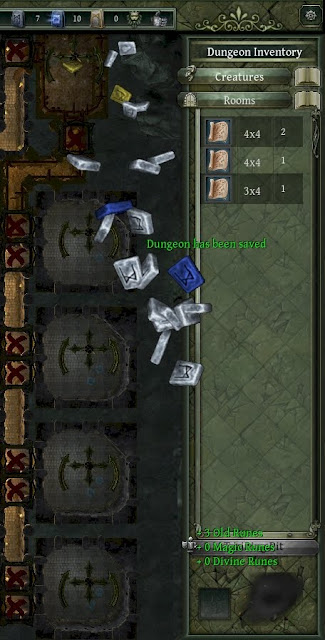 If your dungeon is full of monsters, you may want to start choosing rooms and fixtures instead of gold. This is doubly true if you find yourself in a dungeon you just know you're going to die in because if you die, you lose your gold (and exp too *ouch*), but you'll keep all the rooms, fixtures, and monsters that you pick up.

5- GOLD! If you log in consecutively five days in a row, there will be a nice shiny reward of 2,000 gold for you at the end of the rainbow.

That gold can equal a lot of new monsters for your dungeon. Too be honest, this game is really all about trying to build a dungeon that people will die in, but not always . . . what I mean is that you'll get money and items even if someone conquers your dungeon. The very fact that someone entered your dungeon and played through it will equal a reward. (I've yet to have someone die in my dungeon, but I've heard the payout is much greater if someone bites the big one in your space you've created).

6- Dungeon Pathing. Let me tell you something about the dungeons I've died in. They all have led me from room to room in a very serial and methodical method with one path eventually leading to the end. For this purpose look for rooms that have two door ways so you can build a torturous path for your intruders to walk. Don't give them a break by putting your ending near the beginning; otherwise, they could leave your dungeon at any time. No no no . . . make them pay mercilessly . . . .

7- LOGGING ON! LOL! This website is not bug free. You need to try your username starting with both an uppercase character and a lowercase character. Eventually you'll get the right username. It's just a little bit tricky. Also, even though this is a browser-based game, you'll have to have the Unity player. No worries, the site should walk you through everything you need.

Well, that's about all I've got in me at the moment on Dungeon Empires. Sadly, I've been neglecting my paid subscription games over this free to play. hahaha! I hope you guys give it a shot, and if you do . . . HEY, search for "Stingite" in the dungeon list and walk my butcher's path. ;) (You may want to level a bit first) 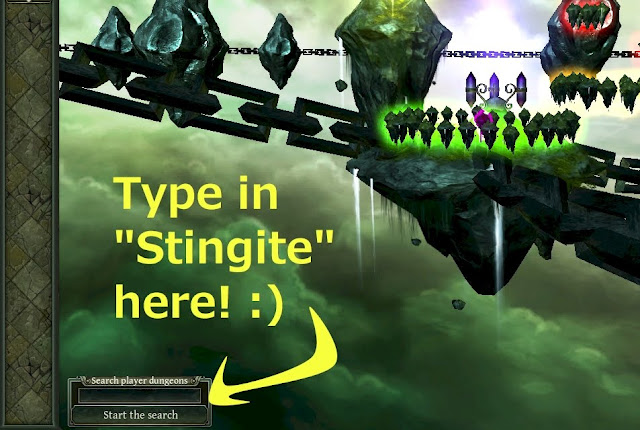 I'll be sure to see your name in my inbox in game like I did with Arkenor. 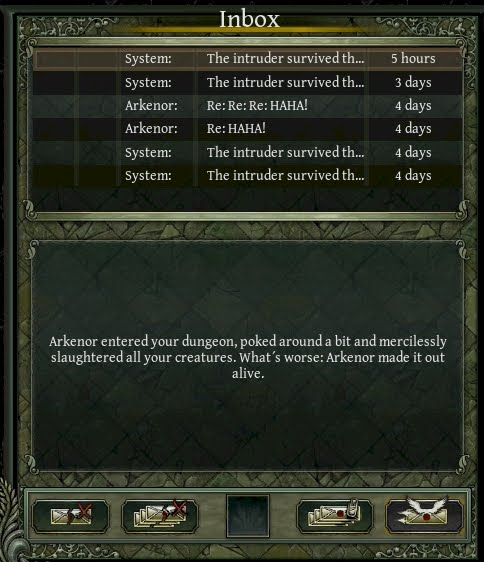 Dang! He survived! ;) I SHALL GET YOU ARKENOR!

If I actually make it to the later stages of the game, I'll have more to post on this subject, but until then, see you in the level 5-15 bracket!

Happy Dueling!
Posted by Stingite at 6:49 AM